Serbia wants baby boom, but couples seem not in the mood

A woman walks in front of a maternity hospital in Belgrade. The government wants to boost the country's birth rate of 1.5 children per family, one of the lowest in Europe.

"Let babies' cries be heard!" is another of the baby-making slogans Serbia is busy producing -- while it struggles to increase actual births.

Women say they need better support not words of encouragement to grow the country's population.

Massive emigration coupled with the plummeting birth rate, which at 1.5 children per family is among the lowest in Europe, has brought Serbia's population down to under seven million people.

According to the United Nations, Serbia's population is expected to shrink a further 15 percent by 2050.

Desperate to reverse the trend, Serbian officials have made some head-scratching proposals, including a plan announced in June to construct "lower-storey homes" in areas with the lowest birth rates.

President Aleksandar Vucic said it was based on a study that showed couples have nearly double the number of children in two-to-four storey homes than in towering apartment blocks.

The comments befuddled the local press, with one newspaper going on an unsuccessful hunt to find any academic expert who had heard of such a study, discovering only "laughs".

The minister in charge of demographics, Slavica Djukic Dejanovic, nevertheless defended the idea that environment can play a role.

"It is a fact that on the edge of big cities where settlements include yards where kids play and parents have a coffee... that kids' joy and cries could be heard more often," she told AFP.

In February, her ministry announced a campaign to tackle the declining numbers and awarded the best pro-birth slogan in a nationwide cash-prize competition.

Among the winners were: "Mum, I don't want to be alone. Dad, I want a brother" and "Love and babies are what we need first!"

Paid 'to give birth'
A new maternity care law passed last year provides some additional aid for parents who have a third and a fourth child, entitling them to 10 years of 30,000 dinars (250 euros, $280) in monthly support. 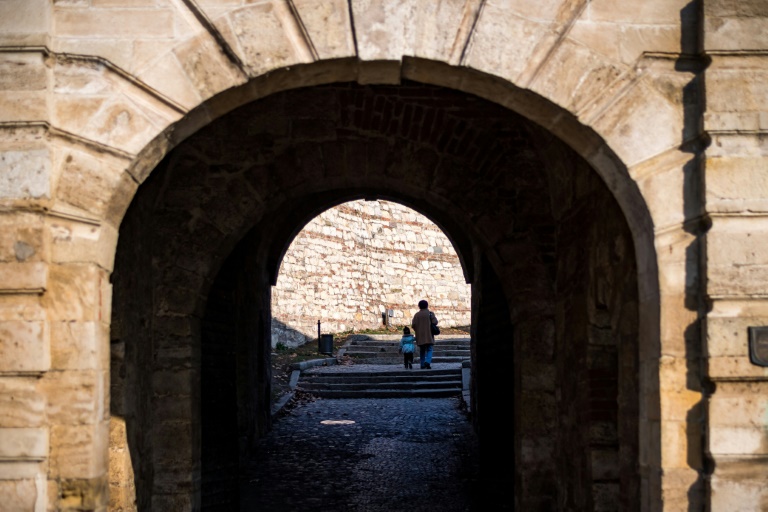 A new maternity law provides additional for a third and a fourth child, but critics say the work requirement excludes many would-be mothers.

That led President Vucic to proclaim: "A mother that gives birth to a third and a fourth child will have 30,000 dinars a month from the state to do nothing... just to give birth."

But critics say the law excludes many would-be mothers.

The full package of state aid for maternity leave is only available to women who have been working without interruption for 18 months.

"What about many women who either do unregistered work in the grey economy or volunteer in public service, like doctors or lawyers, without any payment?", asked Tatjana Macura, an opposition MP who has been advocating to change the law on behalf of the NGO "Mame su zakon" (Mums Rule).

According to various estimates, more than a quarter of Serbia's working population is employed in unofficial work, with an even higher proportion among women.

"These women are invisible for the system because they have worked illegally and would not receive any aid," said Macura.

The law also offers minimal maternity support to unemployed women in a country where the youth jobless rate was over 30 percent in 2017.

Many women are also afraid to take maternity leave because it remains common for businesses to fire them afterwards, despite the practice being illegal, added Macura.

Instead of receiving five months of salary during maternity leave as the previous law allowed, they will only receive three.

Andrijana Marinkovic, a 33-year-old mother affected by the change, said it made her consider raising her one-month-old baby boy abroad, such as an EU or other Western country which gives more support to family life.

"Nobody makes a decision to become a parent because of state support or lack of it, but the (Serbian) state certainly doesn't make that decision easier," Marinkovic said.

On top of the shrinking birth rate, a "brain drain" sees tens of thousands of young Serbians pack their bags every year to study and work in wealthier countries.

That means the challenge is not only encouraging more births, but persuading Serbians to have their babies at home.

Kristina Markovic, a 22-year-old economist, works part-time and lives with an unemployed partner.

"We plan to have a family but not until we both have stable jobs," which means regular salaries, insurance and the possibility to live independently from parents, she said.

"We will decide (to have kids) eventually but my wish would be to give birth in some European Union state," she added.