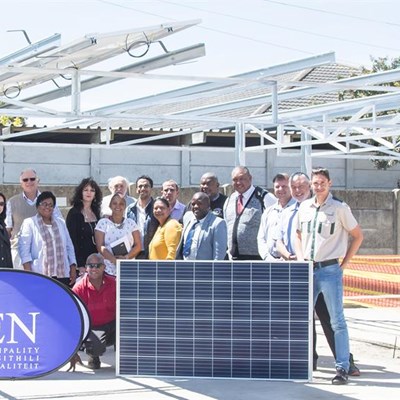 Several executives and staff attended the official launch of the photovoltaic plant at the Eden District Municipality head office in York Street, George.
EDEN DISTRICT NEWS - The Eden District Municipality head office in York Street, George, last week officially launched the construction works of a photovoltaic (PV) plant.
The erecting of the 476 solar panels, is foreseen to be an effective way in which the Municipality can save costs in the long run and reduce its carbon footprint, by generating energy to supply its main building, including its 24/7 Disaster Management Centre, with electricity.
Situated in the employee parking area, behind the building, the plant will have a capacity of 150kW in peak time (11:00 to 14:00).
The existing shade cloth parking structures were replaced with more robust structures onto which the solar panels will be mounted. The parking area will still be used by the employees. According to Eden DM's manager: Bulk Infrastructure Services, Faan van der Merwe, each panel will be capable of generating 260 watts of power and will supply electrical energy to the municipality's main building by means of six grid-tied inverters, each capable of supplying 25kW.
"The grid-tied inverter controls the power output, based on the demand of the building, the amount of sunlight available and hence the generator's output," Van der Merwe added.
He further explained that the grid-tied controller ensures that the power generated by the PV plant is used first and only when demand exceeds supply. The excess will be drawn from the municipal network. "This will bring about significant reduction in the cost of electricity bought from the utility network," Van der Merwe said. The PV plant will also operate during an event of power failure.
The diesel standby generator that belongs to the municipality, automatically activates should the power fail. In this case, the generator will only supply power to the extent that the PV plant is not able to supply.
A local company named Trackos Projects was appointed as the service provider to construct the plant of which the tender was awarded in partnership with the national renewable energy specialists, Energyneering.
The structural steelwork for the Project was done by George Staal & Sweis and the design engineer for the structures was Studio 19, also a local company based in Great Brak River.
Eden District Municipality extends a word of gratitude to the George Municipality for being supportive in assisting with the aesthetic aspects of the plant and also for being most progressive as one of the leading municipalities in the use of the grid-tied inverters, by allowing excess energy to be fed back into its network.
The overall capital cost of the plant is R3.8 million and it is expected that it will pay for itself in five to eight years.
The plant has a design life of 20 years, but it is expected that a significant quantity of energy will be supplied well beyond this time.
'We bring you the latest Garden Route, Klein Karoo, Hessequa news'