Samu signs off in style at KZN Junior 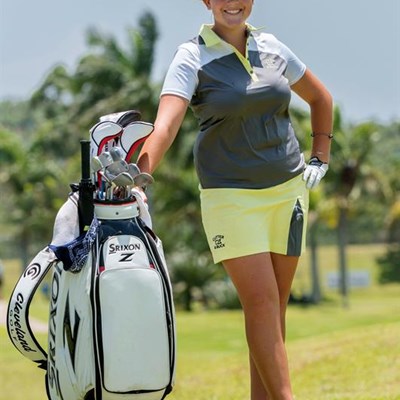 Ivanna Samu; credit Ian Taylor.
NATIONAL NEWS - South Africa’s number two ranked Ivanna Samu won the KZN Junior Championship title with a gutsy performance in very tough weather conditions and a week after she defended her title, her face still lights up with delight at finishing the season on such a high note.
Lashing rain and driving winds tested the field at Selborne Country Club, but the 17-year-old Ruimsig junior battled bravely to triumph on seven-under-par 209 with rounds of 68, 71 and 70.
Samu was thrilled to win the final event of the season, but even more elated with the way she handled the punishing conditions to pull off an eight stroke victory.
“I learned a huge lesson at the KZN Junior - my parents, my coach Graeme Francis and Womens Golf South Africa president Karen Olivant was absolutely right,” Samu explained.
“All season long they have all told me that the experience from my international events will pay off, but I never really understood their meaning until we faced those tough weather conditions. I played in similar conditions in Scotland and England and again at the SA Women’s Open, and I realised that I did learn a lot from those events.”
Samu reached the quarter-final of the Girl’s British Open Amateur in Scotland in August and finished second in the Girls Division at the Duke of York Young Champions in England a month later.
Just three days before the KZN Junior Championships, she outclassed the bulk of the professional field in the SA Women’s Open to finish seventh after navigating a savage North-Easterly wind at San Lameer Country Club for a final round 71.
“I was so surprised when I realised I was completely calm,” Samu said.
“I realised it was because I knew how to deal with the conditions and I played to my strengths. In those events abroad, I learned how to shape shots into the wind and how to use the wind to my advantage when we downwind.
“With all the technology that surround us, we live in such a fast-pace world. We are always chasing instant gratification, but I’ve realised that golf moves at its own pace. I can honestly see the value of experience now. We just have to grind through the disappointments to reap the rewards later.”
Samu said that the standard of golf on the women’s amateur circuit has improved in the last year.
“I didn’t defend all my titles, so I tried to play as many events as possible each time I got back from playing abroad to protect my ranking. The standard is definitely higher and the circuit is really strong at the moment. I really wanted to finish on a high and it meant a lot to me that I was able to defend my title. It was a great reward at the end of an amazing year.”
South Africa’s number one ranked Kaleigh Telfer took second on one-over-par 217 with rounds of 69, 73 and 75, while top ranked junior Woo-Ju Son posted rounds of 73, 71 and 75 to finish third on 221.
Local favourite Elham Shaik won the B-Division on a total score of 168.
The Royal Durban player carded rounds of 85 and 83 to edge out Modderfontein’s Noluthando Mdanda (84-87) by three strokes, while Laylaah Abrahams from Western Province took third (86-87).
Anika Smit, a 24 handicap junior from Vryheid, posted rounds of 38 and 37 to lift the Bronze Division title with 75 points. Simone Ferreria from Margate was second on 56 points and Umhlali Country Club’s Kamaya Moodliar finished in third on 55 points.