The agency says it is concerned about a fraudster selling their cards on social media.

The bank and Sassa cards as well as 36 identity documents recovered by the Calvinia SAPS on Monday, 14 January. Photo: @SAPoliceService

In a post on the South African Government Facebook page, the agency alerted the public about a man advertising the sale of these cards on the social media platform.

“Sassa and the South African Post Office [Sapo] are currently working with the police to get to the bottom of this matter and are following leads that should result in the arrest of what seems to be the mastermind behind this scam,” the agency said in a statement.

It said the stolen cards were sold for different amounts of money by the scammers.

Sassa acting chief executive Abraham Mahlangu said: “These stolen cards were immediately deactivated and are worthless so the public is warned not to be tempted to try and buy them as they are useless.”

Mahlangu added that no grant money could be drawn from the stolen cards and that anyone buying them stood to lose out and if caught may be charged with being in possession of stolen property.

“Beneficiaries are reminded that Sassa services are free and not for sale. They are also advised to refrain from sending their ID numbers, pins, and Sassa card numbers to strangers as these are part of the scams to defraud them,” Mahlangu said.

The selling of Sassa cards is illegal and criminal, he said, urging beneficiaries to report such incidents to the police or alert the agency.

“Sassa officials will never ask for money to issue a Sassa card. Beneficiaries are reminded to keep their pins secret and not to disclose their card and ID numbers at all.”

Mahlangu said beneficiaries of social grants needed to be extra vigilant as there were many fraudsters who would target the innocent and vulnerable. 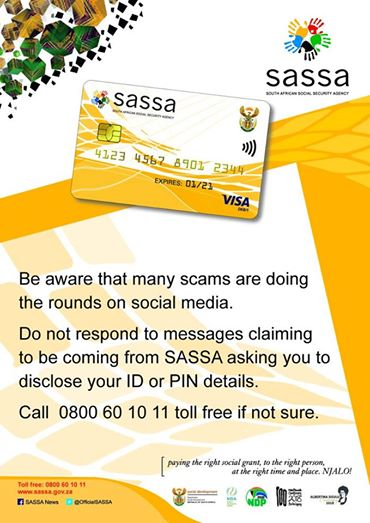 Beneficiaries should call Sassa on 0800 60 1011 whenever they are offered any service relating to social grants for money – no matter how little the charge could be.

The agency added it was not involved in any other business except the payment of social grants.

Meanwhile, in a separate incident, the police said two suspects were arrested last night by the Calvinia SAPS, Northern Cape, in connection with being possession of bank and Sassa cards as well as 36 identity documents.

The police said the suspects would appear at the Calvinia Magistrate’s court on Tuesday facing a charge of contravening the National Credit Act.