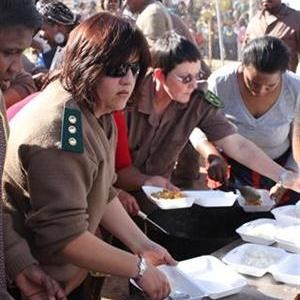 Correctional Services members hand out food and clothing parcels during an outreach in Rose Valley in August.
OUDTSHOORN NEWS - Skills learnt while in prison were used by inmates of centres in Oudtshoorn and George to build houses for needy persons.

On the initiative of Ndikela Booi, correctional services commissioner of the SC management area, members from various units in the area collected funds and procured sponsorships to build the two houses. Female members from the different units cleared a plot in Conville George for the first house to be built.

The house was built in record time by inmates and handed over to disabled Andries Hendricks on 14 August. The second house is currently under construction in Thembalethu.

To further show the commitment of the Department of Correctional Services in playing an active role in the upliftment of the community, women's day cele-brations were held in Oudtshoorn for female members as well as female inmates. At the function senior girls from Fezekile Secondary School received gift bags containing essential toiletries. The gift bags were funded by contributions from correctional services members from the area as well as a substantial contribution from Pick n Pay in Oudtshoorn.

A poverty alleviation project was also launched in the poor community of Rose Valley.

In her opening address in Rose Valley Ms. Booi said: "As members of correctional services officials must act in a manner that benefits our country. It is important to treat each other with respect and civility regardless of political views."
Meals and clothing parcels which were funded by contributions from correctional services members in the southern Cape were provided for almost 3 000 residents of Rose Valley.
Posted on: 04:00 Fri, 07 September 2012