Volatility spread spells trouble ahead for the rand

The next six months are crucial for the economy.

BUSINESS NEWS - Rand volatility is at a five-year low. Don’t count on it staying that way.

One-month at-the-money options volatility for the rand versus the dollar has plunged to the lowest since November 2014 and its 373 basis points drop since the beginning of last month is the biggest among emerging-market currencies monitored by Bloomberg.

That suggests traders are anticipating price swings will moderate in coming weeks, as many markets move into the holiday period and volumes decline.

But the spread of six-month implied volatility over the one-month measure widened by almost three percentage points in the same period, and is now the most in two years, indicating that investors are adding protection against currency moves further out along the curve. 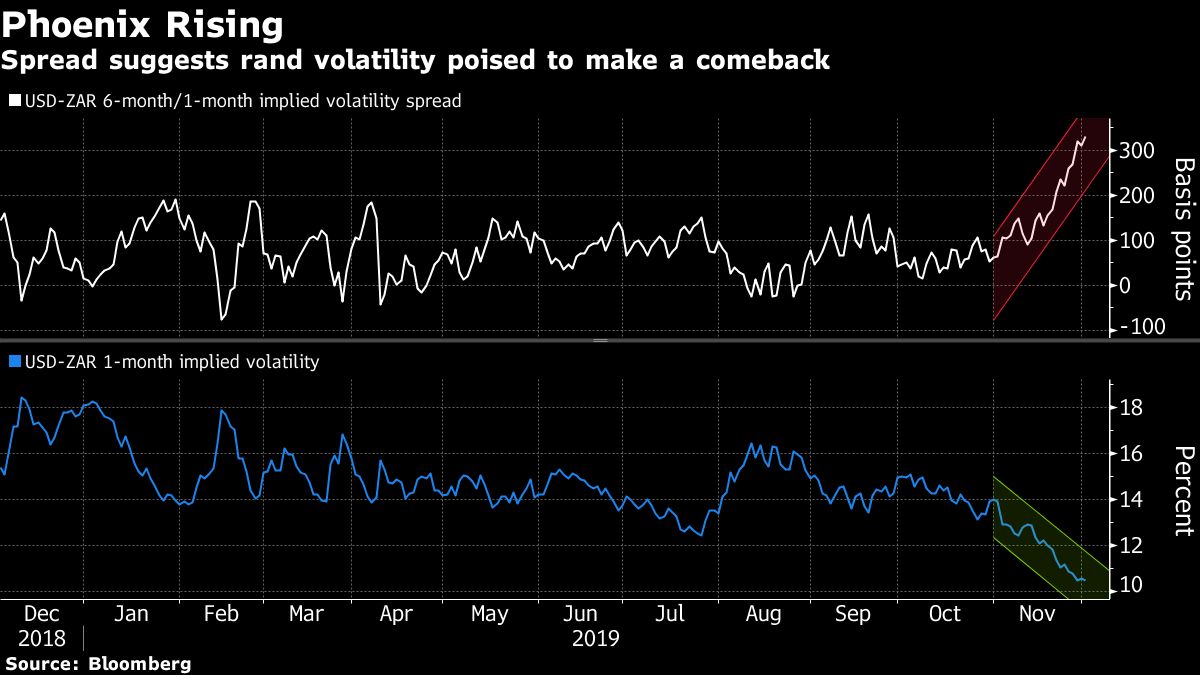 The next six months are crucial for South Africa’s economy, with the government fighting crises at state-owned companies including the national airline and power producer. The budget in February will be watched for signs of further fiscal slippage as Moody’s Investors Service prepares to review the country’s credit rating in March.

All the while, investors will have to weigh monetary policy in the U.S. and Europe, as well as the state of trade negotiations between the world’s two biggest economies and how that will affect global growth. Those risk factors could move the rand either way.

“We expect a very strong move once the market has made up its mind whether the global economy will recover or not,” said Neels Heyneke, a strategist at Nedbank. He suggests now is the time to hedge against price swings. “The direction is always important, but with volatilities this low, we think it is not worth the risk to put all your eggs in one basket, as hedging is cheap.”

The prospect of greater swings in the rand stands in contrast to the outlook for some of its peers. The six-month-one-month implied volatility spread for Brazil’s real is 95 basis points, and is now lower than in June. For Turkey’s lira, the spread is 375 basis points but it’s narrowed from as much as 486 basis points in May.