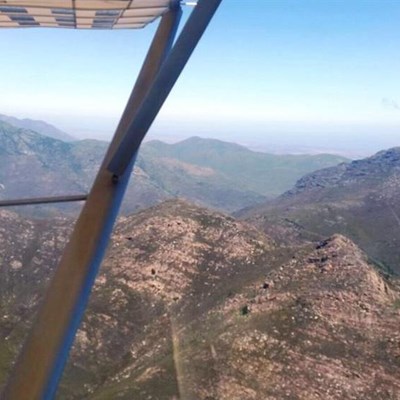 A birds-eye view of the Robinson Pass, a scene the pilots attending the EAA National Convention may expect to see. Photo: Marie Reddie
SOUTHERN CAPE NEWS - The Mossel Bay Aeroclub may host the Experimental Aircraft Association of South Africa's (EAA) 2016 National Convention and Fly-In from 29 April to 2 May. Interestingly enough, the convention has never been hosted South of East London.

A decision was made by the EAA National President Paul Lastrucci for a delegation to travel to Mossel Bay (FAMO) to investigate the possibility of holding the 2016 EAA National Convention at this venue. This was the result of strong motivation at the 2015 Convention at Margate by Hartog Blok (Chapter 322) who lives nearby at Groot Brak River. Hartog's enthusiasm and energy are infectious.

At the end of 2014, the well organised and successful World Intermediate Aerobatic Championships were held at FAMO. Importantly, the airspace is uncluttered and the airfield has a registered aerobatic box.

The Mossel Bay Flying Club has a lovely clubhouse with catering facilities and they operate a fuel service that includes Avgas and Jet A1 with imminent availability of mogas too. The airfield has a 1 200m tarred runway with the taxiway, a large apron adjoining the clubhouse and about 33 hangars.

The use of conveniently positioned hangars by EAA has been assured. The Flying Club is also enthusiastic about hosting the Convention with the warm hospitality shown to the delegation by the very friendly members. All branches of recreational aviation and their followers and members of other sections of Aero Club are encouraged to attend.

FAMO is approximately six kilometre from the town which boasts reasonably priced accommodation where special deals have been promised with more to be negotiated. The delegation overnighted at the Diaz Beach Hotel where the Convention Dinner and Awards will most probably be held in one of their fine function facilities to avoid driving after partying. This hotel has 85 rooms that have been promised at well-discounted rates. Even though a shuttle bus will be organised to transport visitors between the airfield and hostelries in town, camping will, of course, be permitted at the airfield.

To alleviate the cost of travel between Gauteng and Mossel Bay, negotiation are in progress to use the SAA Historic Flight's DC-3 at an affordable rate. Despite the fair distance from Gauteng to Mossel Bay, the distance from Tempe to FAMO is only 373nm compared to about 300nm from Rand to Margate. A cross-country flight from Gauteng to FAMO would be a pleasant adventure.

Although the coastal weather is often variable, good weather during the dates for the 2016 Convention which are to be from 29 April to 1 May may be expected. This falls conveniently between the 27 April (Freedom Day) and 2 May (Workers Day) public holidays.


I'm a 33 year old woman looking to meet men and women between the ages of 25 and 45.
View Profile