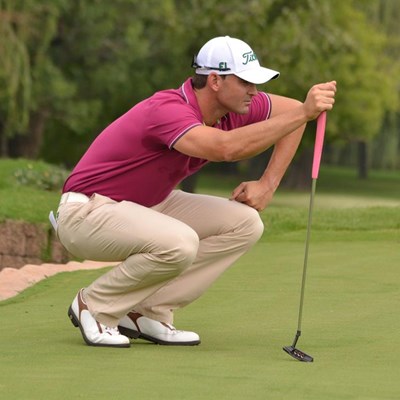 Anton Haig. Photo: CJ du Plooy
NATIONAL NEWS - Two days after Anton Haig celebrated 365 days of sobriety, he hit his first tee shot in competitive golf in the Kyalami Challenge on the IGT Tour. Eighteen holes later, the former European Tour champion found his name at the top of the first round leaderboard.

“Back in the day we would have celebrated a round like this with a lot more than a milkshake,” Haig quipped. “But God has given me this second chance, and I'm not going to waste His time. I’m going to do everything I can with this lifeline and I don’t just mean play golf.”

The 29-year-old Haig hadn’t pegged it on a pro Tour since he campaigned on the IGT Tour and Big Easy Tour in 2013 and throughout his 12-month rehabilitation in the South Coast Recovery Centre in Margate, Haig worked towards one goal - to give his life’s passion one last shot.

“I guess if you are going to make a comeback, start with a bang,” he said.

“If you shoot a round like this, people are going to take notice. So let’s get it out there. I’m the guy who used to dance to the music. I am a recovering drug addict and these days I face the music. I used to run and hide, but I’m not running anymore.

“More than anything I hope that honesty about my addiction and recovery will have a positive impact on the lives of other Tour players and young amateurs. If I can keep just one guy from falling into the abyss, it would make every minute of the last 12 months’ worth it.”

Haig grabbed his first pair of birdies at three and four and added another brace before the turn. A birdie at 10 took him to five under and he added four more at 12, 13 15 and 18 to sign off with a clean card.

“I had no real expectations when I started this morning; I just wanted to get on the golf course and swing my clubs again,” Haig said.

“I hit the ball really well off the tee and I hit my irons beautifully. I missed three greens, but my short-game was exceptional. I holed everything inside 15 foot and missed one four-footer for birdie. Every round won’t be like this, but it was great to be out there and just hitting shots again.

“I never felt nervous, not even coming down the last couple of holes. This was the most fun I’ve had since my amateur days.”

When Haig won the Johnnie Walker Classic and shot into the top 100 of the official world golf rankings at the age of 22, the former SA Amateur champion was pegged as South Africa’s next big thing. But, at 27, he was a shadow of his former self.

“I was on a one-way road to self-destruction and I hit rock bottom when I almost overdosed,” he said.

“I finally looked in the mirror at the South Coast Recovery Centre and I learned some hard truths. I was in demand after the Johnnie Walker and I loved the attention, but I was also an insecure boy who was too immature to handle the pressure of the big stage.

“I wanted to run with the big boys, but I abused drugs and alcohol as a way to escape expectations. In the process I burned a lot of bridges and let down a lot of people down who truly believed in me.”

Haig was diagnosed with osteophytic impingement and a bulging disc in the cervical vertebrae and was forced to retire from pro golf in 2012.

“I had surgery and the drugs helped me deal with the pain, but it also blunted the emotional pain of a seven year career down the drain,” Haig said.

“I staged a comeback every time I thought I had a grip on my addiction, but there was always a reason to cave and fall back down the hole. Now I understand the root of my issues, but I also know I am going to fight this the rest of my life.

“My parents have been my rocks and have walked every step of the way with me over the last 12 months. And Meyer du Toit and his wife Vicky at San Lameer have been like surrogate parents to me and I owe them so much.

“I know the pitfalls. I have to avoid all the places, people and situations that took me to the brink of death. I gained a lot of faith through the programme at South Coast Recovery Centre, but I have to be very careful. Cois (du Plooy) runs a tight ship on the IGT Tour. It’s like a big family and that’s what I need right now. So I’m taking it one day at a time, one round at a time.”