Some light amid the gloom

The economy is clawing back against the odds.

NATIONAL NEWS - Last week South African heads were bowed in shame and sadness as we were once again confronted by the spectre of senseless violence and lawlessness. But there was a little bit of good news in that economic growth surprised on the upside in the second quarter.

Given that many of our social ills (but by no means all) stem from poverty and unemployment, a healthy economy is important. While the outlook for the next year or so is not exactly rosy, things aren’t getting worse.

You could also turn the question around, and ask how crime, violence and unemployment hold back the performance of the economy? The impact is difficult to quantify, but is without doubt substantial. These form part of the structural factors that impede economic activity, along with a lack of skills, corruption, excessive regulations, lack of competition, inadequate infrastructure and distance from our major export markets.

However, these factors are not new and the economy has at times performed well despite them. For instance, in the five years to the end of 2014, real (after inflation) growth averaged 2.5% and in the five years before that it was at 3.6%.

From the point of view of investors, it is the cycle that counts. Markets are moved by whether things are getting better or worse. Going from bad to slightly less bad can often lead to a market rally. 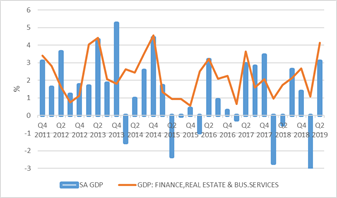 Second quarter bounce
Real gross domestic product (GDP) grew 3.1% in the second quarter (in seasonally adjusted and annualised terms), ahead of the Reuters consensus expectation of 2.4%. This followed the sharp 3.1% contraction in the first quarter.

If nothing else, this means that a technical recession of two consecutive negative quarters was avoided.

The strong quarterly number was driven largely by manufacturing and especially mining rebounding from severe load shedding in the first quarter, but the financial and business services sector also posted stronger than expected growth. Eskom noted last week that it doesn’t expect further load shedding this year, which is a minimum requirement for the economy to keep expanding.

One positive development is that private business investment finally showed some life, despite depressed business confidence. After contracting four of the five previous quarters, fixed investment by private businesses jumped 15% in the second quarter. It is way too early to say if this is the start of a trend though.

Range bound
Compared with a year ago, the economy was 0.9% larger in real terms, in line with the average growth rate of the past five years. Annual growth has moved in a range of 0% to 2% over this period, recently spending more time closer to the bottom than the top of the band.

We are all familiar with the reasons why this period has been so disappointing: a collapse in commodity prices, capital flight from emerging markets, a once-a-century drought, load shedding, tighter fiscal and monetary policy, and a confidence shock from persistent political uncertainty. In fact, looking at this list, you could wonder how we managed to eke out the little growth we did. (Brazil was hit by a similar mix of shocks and its growth rate has averaged -1% over the past five years.)

Lack of momentum
Looking ahead, there is no real evidence that the economy is generating upward. The most recent data – August new vehicle sales and purchasing managers’ indices – confirm this. Without substantial change in the global environment and a material improvement in domestic confidence, we are likely to remain stuck in this range for the next two to three years.

The discussion paper recently released by National Treasury contains a number of sensible microeconomic reforms that if implemented could accelerate growth in the medium term. Unfortunately, for the time being it seems to be hostage to internal politics in the ruling alliance.

Making it easier and cheaper to do business is one of the few policy levers available to government. It has run out of fiscal space to stimulate the economy, while one or two more interest rate cuts by the SA Reserve Bank are not going to move the needle much in the absence of improved confidence.

The missing inflation
A notable and often underappreciated recent feature of the economy is the decline in inflation. While real growth has basically moved sideways over the past five years, annual growth in nominal GDP (adding back inflation) halved from 8.8% in early 2014 to 4.4% in the second quarter.

This implies a decline in economy-wide inflation (known as the GDP deflator) from 6.3% to 3.3%. Economists tend to focus on real growth as an indicator of how living standards are improving and unfortunately, since real growth has lagged annual population growth of around 1.5%, growth in GDP per person has gone backwards. However, nominal growth is what drives the rand incomes of households, companies and the government (through taxes).

The growth in the economy’s wage bill, which makes up the bulk of household incomes, similarly slowed from 8.4% five years ago to 4.7% in the second quarter. The government has based its tax assumptions for the next three years on annual nominal growth of around 7%.

This will have to be revised down in the October medium-term budget. Spending cuts of a similar magnitude are unlikely, so the market expects borrowing to increase. These risks reflect in the high interest rate the government pays to borrow.

The flipside for investors is that they can lend money to the government (by buying bonds) at very attractive real interest rates.

As far as company profits are concerned, slow nominal economic growth is visible in the recent results of a number of South African listed companies.

JSE does not equal GDP
However, it is very important to note that the JSE is not the same as the South African economy. Slow domestic growth only partly explains poor returns from local equities. It is important because it means the JSE can recover without the local economy booming.

There are three main differences between the local economy and the JSE.

Firstly, half the revenues of JSE-listed companies are generated abroad and therefore dependent on other countries’ economic growth. Secondly, looking only at the domestically focused companies on the JSE, the sector split differs from the SA GDP breakdown. Banking has a larger weight, and agriculture, manufacturing and construction smaller weights.

As it happens, the sectors the JSE has higher exposure to tend to be the better performing ones, notably financial services (see chart 1). The JSE has a higher weight to mining too, but the large mining houses listed on the JSE are global players. The biggest, BHP, has virtually no mining activity in South Africa anymore.

Thirdly, many large players in the local economy are not listed on the JSE, including (obviously) the government and its many large state-owned enterprises, nor are small and informal businesses.

Five-year rolling returns of SA and global equities in rand 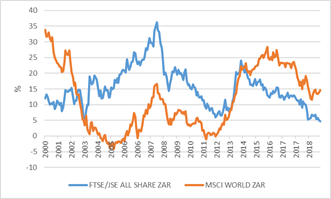 Turnaround
At the end of August, the rolling five-year annualised return from local equities was lower than any time since 2003 at 4.7%. The same number for global equities in rand was 13%. This is clearly worrying, but the connection between the local economy and the continued poor performance of the JSE is often overstated.

Amid all the despondency about crime and corruption, it is easy to forget that as recently as 2017, deep into the Zuma presidency, five-year annualised returns were still in the region of 13%. In fact, local equities outperformed global equities during the first Zuma term.

These things are cyclical, and the cycle will eventually turn again.

When exactly, no one can say. For local equities to deliver solid real returns over the next few years three things are required:

Currently confidence is shattered and the mood is gloomier than in many years, and this is already priced in by markets. Perhaps this reflects the old dictum that happiness is reality minus expectations.

Expectations of President Cyril Ramaphosa’s ‘New Dawn’ were high, and while there have been important changes, things are clearly not moving quickly enough. This pessimism, however, is surely overdone and our country has survived worse.

When we allow emotions to interfere with our thinking, the quality of analysis usually suffers greatly. Nowhere is this truer than in the field of investments.