‘I will drive over and kill you’ 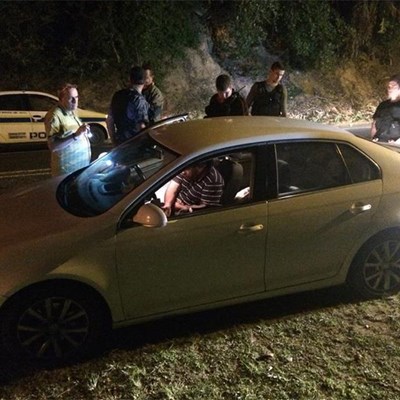 The motorist who threatened to knock over bikers was stopped by Ramsgate police, Maser Security, Wolf Security and three Ramsgate Crime Watch patrol cars.
NATIONAL NEWS - Described as ‘aggressive’, ‘arrogant’ and ‘rude’, a motorist driving a white VW Jetta is reportedly doing the rounds on the South Coast, threatening motorists and bikers.

The Herald also received information that this same man has been harassing businesses and women in the area for the last two months. Posts on social media have described him as someone who is ‘not normal’ ‘intends to do harm’ and is ‘bad, bad news’.

Margate detectives are currently investigating a case involving this man, who allegedly intimidated a couple at a Ramsgate petrol station recently.

Police spokesman, Captain Gerald Mfeka, said the man had apparently accelerated deliberately towards the couple who were filling up with fuel, made a U-turn in front of them, used intimidating words and threatened to ‘drive over and kill’ them, before driving off.

“Detectives are still investigating and no arrests have been made so far,” said Captain Mfeka.
Read more on the Caxton publication, South Coast Herald.
Posted on: 12:08 Mon, 26 October 2015