Police in the Lozere region blocked off an area in the Cevennes national park where up to 10,000 people, including small children, attended the unsanctioned rave at the weekend, local authorities said.

After an initial strict lockdown by the security forces, partygoers were gradually allowed to leave and by Monday afternoon, some 4,500 people were still present at the remote site, Lozere's top local official, prefect Valerie Hatsch, said in a statement.

Police had been guarding the secluded site in a protected area of the national park, preventing vehicles from leaving "for health reasons linked to the risk of spreading COVID-19," local authorities earlier told AFP.

Some 10,000 people in hundreds of cars had streamed to the site from around midnight on Saturday for a rave party that flouted a ban on gatherings of more than 5,000 people imposed due to the coronavirus outbreak.

Police blocked off the area on Sunday morning to prevent new partygoers joining. Partygoers were gradually allowed to leave.

By Monday, they were checking the blood alcohol levels of those leaving and staggering departures to prevent traffic blockages at the height of the holiday season.

Many people were still so inebriated that they were unable to drive anyway from the site on the Causse Mejean plateau, officials said.

An AFP photographer saw dozens of cars, caravans and camper vans parked across the plateau, which usually is just barren wilderness.

Flouting all the rules'

Lozere, France's least populated department, has been spared the worst of the COVID-19 pandemic, which has so far claimed more than 30,000 lives nationwide.

Locals were furious about the risks posed by the event. Authorities said the revellers did not wear masks and ignored social distancing rules.

"People from Lozere take COVID very seriously, they have respected the distancing measures and this massive influx of people who flout all the rules has shocked them profoundly," Hatsch said on Sunday.

Police handed out fines for public drunkenness and drug use.

Farmers were also angry that the partygoers invaded pasture and fields, damaging them in a national park where the farmers themselves operate under restrictions.

Police handed out fines for public drunkenness and drug use and more testing facilities were being set up for sobriety and for the coronavirus, the prefecture said.

Investigations were in progress to determine the identity of the organisers, who would be the subject of legal proceedings.

There were several young children among the party-goers, and a mobile clinic and Red Cross personnel were sent in to ensure everyone's safety. 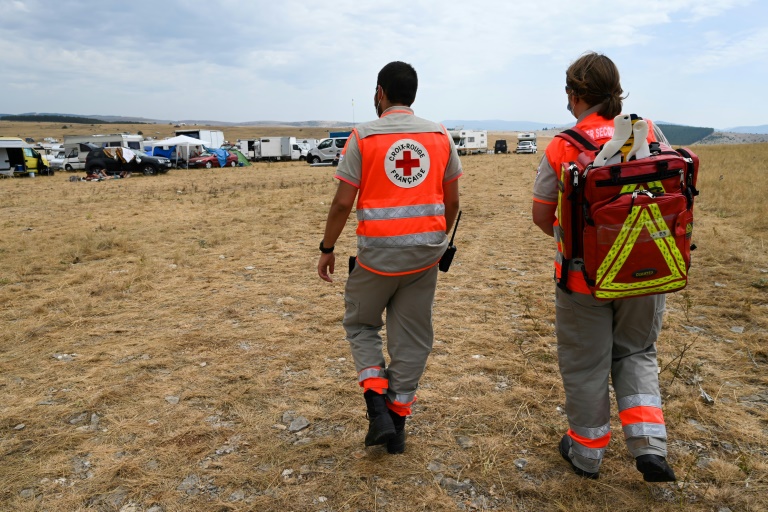 Farmers were angry the partygoers invaded pastures and fields.

With France in the grip of a heat wave, authorities handed out water and distributed face masks and sanitising hand gel.

There has been increasing concern in France about illegal outdoor parties during a hot summer season with coronavirus cases on the rise, especially among people in their 20s.