Touring Paris in a motorcycle side car are Tersia Hoffmann (left) and Maura St John.

LIFESTYLE NEWS - On the coldest windiest day in April, contemporary artist Maura St John, chairman of Scava and a committee member of the Friends of the George Museum, ventured to the top of the Eiffel Tower with an artist colleague, Tersia Hoffmann.

She took with her a large print of the Friends of the George Museum logo to make their presence felt in that iconic landmark. Not too long ago it was described as the tallest building in the world.

Maura and Tersia, long standing Scava members (South Cape Association for Visual Arts) were given an opportunity of a lifetime, a month of free accommodation in a special arts building in the centre of Paris.

In fact five South African artists were awarded this opportunity during April, one young lady (an art student from Pretoria University) had a 6 month art scholarship to Paris.

Maura writes about their venture:
Along with a free, self-catering apartment, each artist was given a special card giving them free access to most museums and art galleries. Some galleries are not free but gave a much reduced entrance fee.

The most important factor is the card holders were able to go straight to the head of the queue and got instant access.

The card was the magic ‘open sesame’ which saved several hours of standing in line with up to a thousand tourists outside each venue.

After the Second World War a prominent French architect was responsible for the renovation of several buildings in the heart of Paris, next to the Seine. The first studios in a complex were to serve as working/living spaces to accommodate French artists. Eventually this ‘gift’ was extended to all foreign artists.

The idea was to bring artists from all over the world under one roof to work together, to perform together, to be exposed to the riches of France and French culture, and to convey what had been gained during their sojourn in Paris, to their countries of origin.

The studios could be acquired by foreign governments, foundations, universities or private sponsors in terms of an occupational rights agreement that would run until 2060. The main building is known as the Cité, is registered as a public utility foundation and is mainly subsidised by the French departments of foreign affairs, arts & culture and the Ville de Paris (City of Paris).

South Africa purchased the rights to three of these apartments, two in the City Centre and one in Montmartre, with the assistance of Gold Fields Foundation, Volkskas (later Absa) and the South African Arts Association which is now known as Sanava (South African National Association for the Visual Arts).

The extraordinary enthusiasm and support of Bettie Cilliers-Barnard, partnership with the French Embassy, the Institut Français and the resources of Barclays (again ABSA) and Sanava have created this dream for South African artists who can use the opportunity to prepare for large international awards or to enrich their artistic lives with a shorter period of cultural permeation or activity.

During our visit, we witnessed the burning of the Nôtre Dame cathedral. In fact we had been to Mass the day before and were present at a special organ concert on the eve of the dramatic event. Our apartments were just a few streets away and many international artists could be seen with heads out the windows taking in the full horror of the fire. 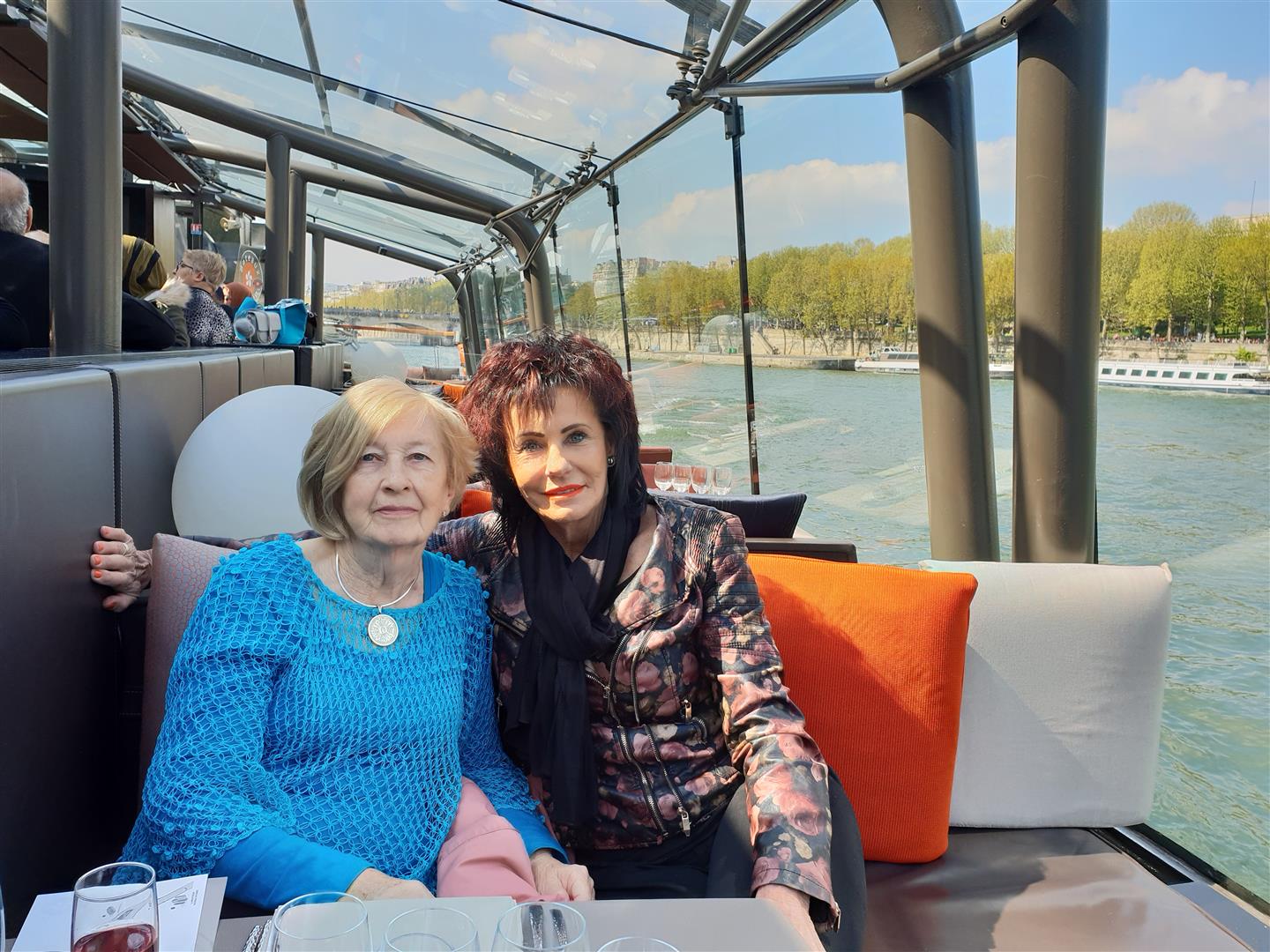 Maura St John and Tersia Hoffmann having lunch on a bateau on the Seine.

For weeks afterwards the population of Paris, and the world’s press, were congregating around the cathedral all looking glum and down hearted. The police did what they could to cordon off some adjacent streets and bridges to allow access to the forensic experts and officials clearing the site and planning the restoration.

We also had a moment’s face to face with the ‘Yellow Vests”. This group was marching in a well organised and cheerful manner, to a special centre of protest in the south of Paris on a sunny Sunday afternoon.

The week prior to our encounter there was another march, but not a happy one, in the centre of Paris.

The metro was in lockdown and most streets leading to the march area were cordoned off with thousands of police present. Their plan was to make access difficult before and during the march. Indeed, after the early encounters with militant marchers, authorities became extremely well organised and the city carried on business as usual. There was minimal disruption.

After several weeks in France and in the UK we agreed that it is a great pity that we in Africa are fixated on erasing our history, when other more enlightened countries ‘go the extra mile’ to preserve their history no matter how painful. France, having had three wars in close succession (the Franco Prussian War, World War 1 and World War 2) makes an issue of honouring events which make their nation what it is today.

The Dutch, British, Scots and Welsh likewise. And the Irish, who had 800 years of occupation before their final independence drive in 1916 have preserved all their history and even their books, some dating back to the fifth century.

Children in Europe are introduced to arts and culture at a very early age. They too throng the museums and galleries and art education and projects are organised. Special times and areas are set aside for this, in some instances thousands of patrons were kept waiting outside in inclement weather whilst the children were enjoying themselves inside.

Some museums and galleries only open to the general public at 11:00 so that children have full use beforehand. Playground spaces were also prolific and much more imaginative. It must be great to be a child in Europe today.

One pleasant surprise: Most French people are now multi lingual. This is naturally the result of the European Union and the pressure of the almighty dollar as their country enjoys a thriving tourism industry. America and China appear to be the biggest contributors.

But it is nice to see foreigners really making an effort to reflect French politeness and willingness to communicate in the other’s language.