Confidence was shaky even before Covid-19 was seen as such a big threat.

Consumer confidence has dropped and recovered sharply on five occasions since 1995, but an improvement is likely to be less swift this time. Photo: Moneyweb

NATIONAL NEWS - Two recent publications by the Bureau for Economic Research (BER) at Stellenbosch University show that the outlook for the SA economy was already bad in the first quarter of 2020, even before the widespread panic around the spread of the coronavirus.

In the past week, following President Cyril Ramaphosa’s declaration of a national state of disaster on March 15, emergency measures have included the cancellation of sporting events and big concerts and the placing of restrictions on several businesses such as restaurants and similar vendors that usually attract lots of people in a small space.

Then on Monday night, the president announced a 21-day national lockdown, requiring all but essential-services personnel to stay at home.

All of this will have a dramatic effect on economic activity.

Business confidence
A look at a graph of the BCI shows that businesses were already pessimistic a few weeks ago, before the coronavirus was seen as such a big threat. This is evidenced by the fact that the survey was conducted between February 12 and March 2 – before Covid-19 and hoarding toilet paper became topics of discussion.

“The RMB/BER Business Confidence Index slumped by eight points to 18 in the first quarter of 2020, the lowest level in 21 years,” noted BER, adding that more than 80% of respondents to the survey found prevailing business conditions worrisome. 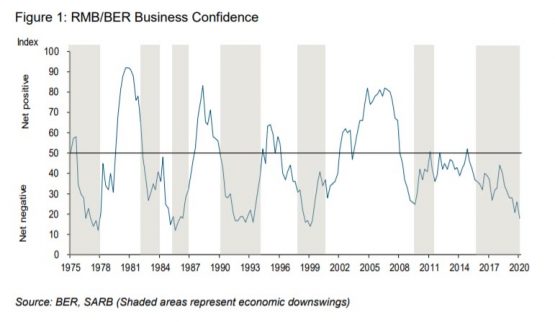 BER economists note that the BCI reflects the responses of 1 800 executives.

It is even more important to note from the graph that business confidence did not recover much after the sharp drop when the global credit bubble burst in 2008.

Ettienne le Roux, chief economist of RMB, says that since the survey was completed in early March, things have gone from bad to worse, particularly on the global front. “Indeed, for a small open economy already in recession, the timing of the prospective sharp Covid-19-induced global slowdown could not have been worse.

“Exports will be hit, tourism flows will be affected, and supply-chain disruptions will be widely felt,” says Le Roux.

“In short, nothing spells any good news for the RMB/BER BCI, which in all likelihood will continue to trend lower in the period ahead, with obvious negative consequences for future trends in private sector fixed investment.

“The hit from the sharp global downturn, coupled with measures taken locally to contain the spread of Covid-19, will probably see the BCI drop even further in coming quarters,” says Le Roux. He adds that the lowest the index has been was 12 index points reached during the 1980s.

“Similar, if not worse, levels are possible this time around.”

Read: How the economy could emerge stronger from Covid-19

Le Roux apologised for not answering some of Moneyweb’s questions, saying that he is running around like “mad”.

The most important, and difficult, of these questions is the effect of the predicted severe downturn in the economy on the poor and vulnerable in SA.

Sadly, it is the same poor and vulnerable who are affected by either a viral epidemic or malnutrition due to even worse economic conditions.

Consumer confidence
FNB Senior Economist Siphamandla Mkhwanazi weighed in on the outlook for the confidence levels of consumers and households.

The Consumer Confidence Index (CCI) has declined to very low levels on five occasions since 1995, but recovered sharply every time.

Mkhwanazi says it is however difficult to see a sharp recovery in the short term this time, given the challenges we are facing now.

“The impact of Covid-19 and the likelihood of a prolonged recession is yet to have its full impact on income,” he says.

He adds that the index will probably drop further in coming months, but it is difficult to say how low it will fall. “We have not been faced with such an economic shock before. So we would not rule out the possibility of the CCI testing historical lows.”